Demonstrators speak out against new store in mall 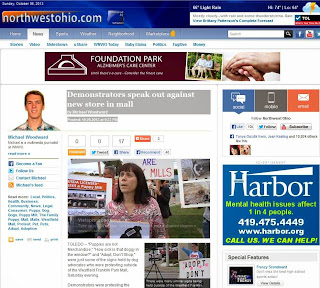 Demonstrators speak out against new store in mall

About 70 area residents protested at the Westfield Franklin Park Mall on . The mall signed a new lease with ’s largest chain and supplier of puppy mill dogs – The Family Puppy. The store has a history of working with bad commercial breeders with violations to the Animal Welfare Act. Even when the federal inspector tells them to treat an animal in pain in suffering, they ignore the inspector. These breeders do not listen to The Family Puppy – they don’t’ care about their standards. The store ends up dropping the breeder because we exposed them, not because of the violations.

Contrary to The Family Puppy’s claim that “we only use breeders that will meet our standards, and those standards are above those of the Animal Welfare Act”, 14 of the 16 primary suppliers have been cited for violations to the Animal Welfare Act and many have been chronic offenders.  Some violations include shelters with temps exceeding 87 degrees, excessive feces, no heat, unlicensed personnel performing surgeries, unattended bite wounds, poor ventilation, feet dangling in wire floors, dirty dogs, accumulated grime and lack of veterinary care.
The Family Puppy states they know how to screen a breeder because the co-owner has “been working with breeders for 35 years”, yet neither owner carries any professional credentials in the fields of animal husbandry and disease control.  The majority of Indiana USDA Licensed breeders - who on average, house 52 animals with 8-16 different breeds - also lack professional credentials in these fields.

According to recent inspection reports, two primary suppliers for The Family Puppy are not adhering to directives from federal inspectors or following rules as mandated under the Animal Welfare Act ():

Jean Keating from the Ohio Coalition of Dog Advocates is leading the campaign to block The Family Puppy from expanding in . Here is a link to her interview with Channel 24 at the protest.
http://www.northwestohio.com/news/story.aspx?id=955378