A Letter to the Pet Store Owners

Before and throughout a campaign, I continue to ask the pet store owners to stop selling puppies and why. The writing is on the wall and we will not be turning our backs o

n the breeding dogs. Just because they are hidden in shacks, standing on wire floors surrounded by privacy fencing, so the neighbors don't hear their stressful barks ---we still know they are there. I will think about them every day. (Photo: Glen Yoder, Indiana)

Thank you for promoting shelter dogs in your stores and attempting to improve standards for commercial breeding. However, conscientious consumers want cruelty free pets and to know exactly where their family members are coming from, not a broker name or a selected-staged photos, to ensure they are not contributing to abuse or neglect.

The public is learning about puppy mills and their link to pet stores. They are learning about the Amish’s involvement in commercial breeding. New laws and ordinances are being passed across the country and the future of the pet trade does not look promising.

We both know that animals are purchased at pet stores out of impulse without fully understanding the commitment required to provide life-long care for the animal. As a result of irresponsible human decisions, each year thousands of animals are surrendered to local shelters and rescues only to be destroyed due to lack of space, funds, and adoptive homes.

Incidents involving sick puppies purchased at pet stores are routinely reported. Transportation from distant states, such as Minnesota, causes stress and increases disease transmission as well as holding animals in a retail environment. Overall, we know that there is an inherent conflict between ensuring profits and caring for animals in commercial environments. The mistreatment of animals is unavoidable. Online reviews, USDA inspection reports and Michigan Department of Agriculture complaints can paint a terrible picture of your operations.

The USDA is now issuing more citations in their inspection reports and returning to verify corrections have been made after their internal audit. It will be very difficult for your breeders to maintain their inventories levels and avoid citations.

We would like to see all pet supply stores promote adoption only.

February Protests at the Valley

Mary is kicking off February rallies this weekend at the 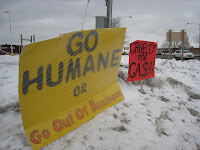 Genesee Valley Mall, home of the newest Family Puppy store. Please join her from 12-3 at the Miller Road entrance next to David's Bridal. Bring your own sign and park at David's Bridal in the back.


Remember Valentines Day is coming up and breeding mom's will be working over time. If they are out in 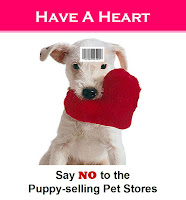 the cold, you could spend a couple hours helping us hurt sales once again. Bring a
friend!

Welcome to the Campaign!

Welcome to the Family Puppy Boycott Blog! My name is Pam Sordyl, and hellooooo to all the Michigan Dog Advocates fed up with puppy-peddling stores, booths, pole barns and brokers. If you didn’t know, The Family Puppy is the largest puppy-selling pet store in Michigan pumping thousands of puppies into our communities..thus this live blog.

For those of you who may just be joining our “Family Puppy Boycott” campaign, you can get up to speed on things by reading our Meetup Message Board that we used last year to post activities.

I plan to keep you up-to-date on all of our Family Puppy campaign activities for 2011 here on our blog.

So allow me to debrief you. In December of 2009, we learned that The Family Puppy retailer opened a new store at the Genesee Valley Mall located in Flint. We gathered some breeder information and quickly met with the mall management to ensure they investigated the breeders themselves and understood they would be supporting puppy mills. We then launched the Tell Genesee Valley Mall "No Pet Stores" petition. Please sign – still active!

We called and wrote letters to the store asking them not to sell puppies. They were not open to holding adoption events only. We were surprised that the media covered the over population problem in Genesee County, as well as, our campaign with many articles in the Flint Journal in the first quarter of 2010.

Our campaign team grew when we launched our Facebook Group- 235 members to date. Please join us!

To help spread the word about puppy mills, we asked local pet supply stores in Genesee County to sign a pledge not to sell puppies. This was a very successful with almost all the stores pledging. In total, we collected 90 pledges across the state.

In the spring of 2009, the focus changed to the store’s commercial breeding facilities, which is what this is all about. We completed a five-month investigation including kennel photos and videos. We released some of our findings in a press release that announced our Puppy Mill Awareness Day Protest at the mall. Flyers were distributed.

Our Puppy Mill Awareness Day event attracted the media including a story about a Tegan, a sick pup that was purchased. Linda Dahl stated the store never did follow up after the interviews. The protest turned out to be our largest rally ever.

For the holiday’s, the stores busiest time of the year, we launched a series of rallies and issued a another press release - Puppy Mill Awareness Plans Round-A-Bout Rallies. Concerned citizens reached many mall patrons warning them about the pet store. We held eleven protests at the Genesee Valley Mall. Channel 12 helped us reach the community as well.
Posted by Pam Sordyl at 4:19 AM No comments: